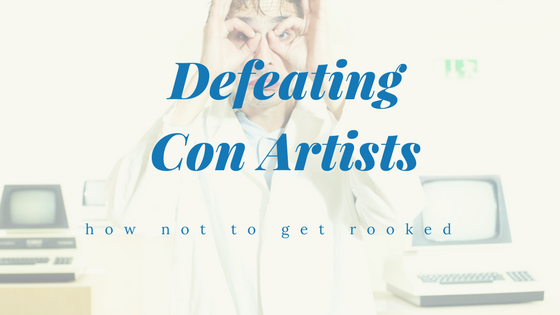 Don’t Get Rooked by Scams: 7 Tactics to Stop Con Artists from Stealing from Retirees

Guest Post by Douglas Goldstein, CFP®, author of Rich As A King: How the Wisdom of Chess Can Make You a Grandmaster of Investing. www.RichAsAKing.com

How do con artists target you?

mortgage and life insurance rackets, and more. Sadly, not only do strangers harm seniors, but also people close by hurt them as well.

The FBI catalogues common frauds perpetrated against people who grew up in the 1930s, 1940s, and 1950s, a time when being polite and trusting was considered a virtue. Regrettably, these deeply engrained traits also make those generations easier marks. Moreover, older people tend not to report scams because they don’t know whom to tell, are too ashamed, or don’t even realize that they have been swindled.

3 case studies of retirees who were scammed

Not long ago, an elderly client told me how she had lent the Visa card that was linked to her brokerage account to her son to use for the day. She forgot about it, since she rarely used that card herself. It took her almost a year to discover that he had been using it to steal money from her on a regular basis by withdrawing funds from a cash machine. He would take only small amounts, so that she wouldn’t realize that the changes in her portfolio were due to withdrawals. She would just assume her stocks and bonds had dropped a little in value. Another woman’s nephew, who was a lawyer, told her that he was investing her money with a major, international investment house. He even printed false statements with the logo of the company on it. When she asked for her money back, he told her the investment house had gone out of business. And yet another client kept lending money to help a sick friend pay for medical care. Half a million dollars later, he finally said to himself that something is very wrong here… and then the sick friend disappeared.

When I told these stories to Susan Polgar, my co-author of Rich As A King: How the Wisdom of Chess Can Make You a Grandmaster of Investing, she quickly pointed out the chess analogy: Never blindly jump to capture an opponent’s chess piece, since he may intend to sacrifice it in order to get a much larger compensation from you. Stop and think about the whole plan and why he’s giving you something for free.

Practical steps to take when someone offers you a deal

Unlike in chess, where the rules prohibit consulting during a match, in the financial world, it’s advisable to consult with a professional before you make a move. Keep these steps in mind to protect yourself:

What you need to know about avoiding scams

Susan Polgar, the world chess champion who wrote Rich As A King with me, once told me over a game of chess… as she captured piece after piece of mine… that the way to avoid getting your assets snagged from under your nose is by having a well thought-out strategy at the outset. If you develop a financial plan along with a Certified Financial Planner™ professional, you can then tell anyone who approaches you with a quick-money scheme, “No thanks. It’s not part of my plan.” And if he really persists, ask him to give you the proposal in writing and show it to your advisor to get his input.

Thinking strategically and planning ahead not only helps keep your financial life on track, but provides an easy way to benchmark whether or not you’re meeting your goals, and provides a safety net to prevent you from falling into a scammer’s schemes. Sticking to your plan, and avoiding dramatic moves is a simple way to minimize the chances you (and your money) will fall into a scammer’s hands.

Contact Douglas Goldstein, CFP® or learn more about Rich As A King: How the Wisdom of Chess Can Make You a Grandmaster of Investing at www.RichAsAKing.com

Doug Goldstein will be my guest on my November 25th episode of my Revolutionize Your Retirement Expert series. Click here to see our upcoming episode.